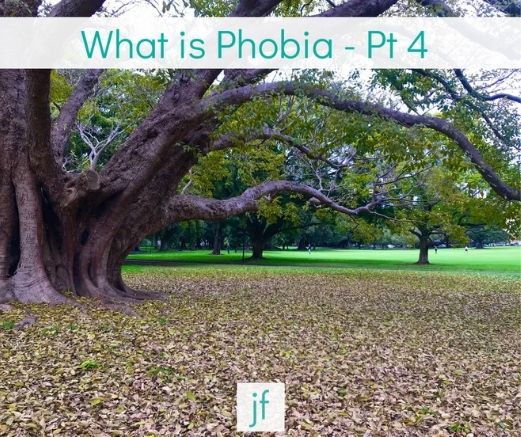 I share my thinking with clients; otherwise, they can believe they are doing something wrong if a practitioner changes a treatment plan or treatment tack. This often culminates in fear and further anxiety that they are untreatable. Such thinking, on the part of the client, is not usually shared with their unsuspecting practitioner. This can be a point of rupture, when clients often leave. As practitioners we only learn of this fear when a new client tells us of their previous experience and their own hypothesis that they are untreatable. Often an incorrect hypothesis.

Moving from EMDR and back to a talk-style process was a significant change of approach. I did not need her to be thinking this was impossible, or that she was impossible. She had believed that for far too long. We needed to find the correct combination, which I had no doubt we would do.

While nothing specific came up in the EMDR, she did keep referring to a particular scary movie, famous in the late 1960s. She thought she might have watched that same movie again many years later but reported not having recalled anything relevant to our cause.

I now decided to pursue this as a vague link, not having any idea of what it might divulge at this stage and never having watched the gratuitously gory movie myself. I was working on the theoretical premise that a repeated memory carries significant information, usually trauma.

I could have gone off and watched the movie myself; however, one person’s experience is quite different from another’s. Besides, I don’t watch scary movies of violent gratification.

Eventually she is able to tell part of that story. She recalled being babysat by an aunt only ten years her senior. Her parents were out and her aunt had friends over for a pizza and movie night. She calculated she was around six or seven years of age at the time. This age assessment confirmed my earlier hypothesis that we were not working with an early infant rupture.

At this point in the work we both began to feel the phobia was something to do with that movie. She became frustrated, anxious and teary, even though she kept defaulting to parts of the movie. After several sessions of storytelling I decided to resume some EMDR using this new data we had elicited. I decided to link what we did know about the movie with the void of what we did not know.

Almost immediately she recalls a savage dog in the movie. In an EMDR set she sees the image she has concealed from herself for nearly twenty years. It was frightening as she described it. Teeth bared, salivating, snarling, growling. Quite a terrifying scene for a little girl sitting on a sofa ‘alone’.

Task oriented, she sets off to hire the movie in the hope of revisiting what she must have seen on that night.

She returns to session despondent. ‘There was nothing.’ She had watched the whole horrid movie, start to end, with no reference to a dog. Although taken aback by this outcome, she was appalled to realise how, so young, she had watched such a frightening movie. And perhaps more so that no one thought to protect her from the horror. She says she is unsure which was more painful.

I recall once being told there are many variations of most old movies. Some variations have cut pieces here and there. I tell her this, suggesting, if she felt up to it, she might trawl video stores to explore and obtain various versions of the movie. It sounded like a feeble idea to me, not so focused on CBT. I know I certainly could not have watched that movie once, let alone repeated versions. She still had a strong feeling her issue was about this movie and decides to explore further.

I make it known here the description of work with this client is clearly CBT. It is highly unlikely I would give such advice or instruction to a client in a deep psychotherapeutic setting.

I took this approach, in this setting, as we were not doing deep archaic psychotherapy. I understood that, and while this had been traumatic, it had also been a puzzle in her life. At this juncture I felt the cause of her phobia had become as important to my client as the relief.

She returns to the next session both shaken and relieved.

There is a snarling dog. Oddly, it is at the very beginning of the movie, before it even starts. Just a split second of him snarling and drooling. This savage dog appears at no other time throughout the movie.

We hypothesise that, on viewing the viciousness of the dog on the screen, she absorbed the information, then dissociated. Her response was trauma via terror, which was caught in an intrapsychic pocket, not to be recalled consciously. It was not recalled because it was so frightening and also left her unable to recall any further part of the movie.

Trauma has the power to play out in everyday life from that frozen location in the brain and body. This is typical of post-trauma development and the ongoing symptoms. This is what happened for this client.

While the mind will not recall such exposure in day-to-day life, the body does remember and acts (behaviourally) from that knowledge. As with all human wounding, such trauma feeds our everyday thoughts, feelings and behaviours. Hence, her hypervigilance and hyperarousal at the sight of a dog.

Contrary to popular belief, we cannot out-think ‘material’, the very substance of a client’s issues, in this unconscious pocket – a pocket with the power to drive all manner of addictions, depression, anxiety, phobias and more!

Our work has ended.

His secondment has ended

They are moving to Perth. She is going with him. They plan to marry.

We terminate, without knowing if we have ‘cured’ the phobia.

She laughs, we both laugh. We hope so. She is going to live with a dog-loving family, owning eight dogs between them.

In her last session, our sixteenth, she came into the room and announced incredulously, ‘Do you have a dog?’ Not giving me time to reply and answering her own question, she asked, ‘How long have you had a dog?’

It was the first time she had seen my old dog in the front window as she walked past to my consulting rooms.

I told her I have had a dog since I was three years old, for most of my life.

We both pondered this point; for her, how she might have continued in the struggle to find the source of her fear, and for me, how I kept my personal life out of the room. Of how important it is, even in CBT work, that the practitioner does not share with, or place their own values on, the client.

In this piece of work the phrase, ‘We must remain a blank screen to our clients,’ was never more apt. She did not need to know about my own dog-loving life.

She did begin smoking again she told me. She felt sad about that and said, ‘I guess I do still have other work to do.’

In her short time with me she had come to understand her anxieties more and knew they were pulsating at a subterranean level.

That work would need to wait; for now she had what she had come for.

Postscript: I received a beautiful card with their wedding photo in it. It was from him, oddly. I had never seen or spoken to him. The card read simply, ‘Thank you for helping us find a life together.’ I hear from them from time to time. They have children and three dogs, and appear very happy.

I guessed we had that ‘cure’.

This case goes somewhere to clarifying the difference between psychotherapy, which involves working with the ‘family of origin’, who are made up of the client’s early nurturers, in a deeply archaic manner (and which is outlined in more detail in my book ), and the usefulness of CBT and various techniques, as interventions. This case was not psychotherapy.