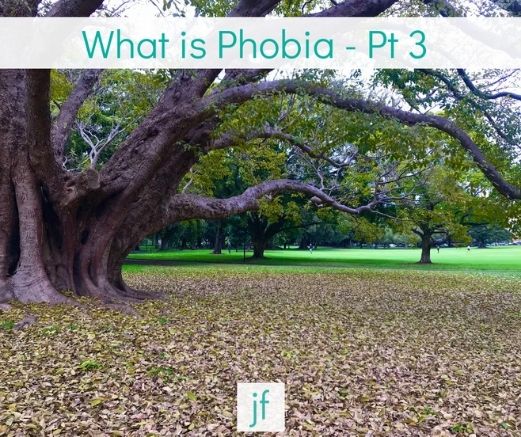 Following on from last week’s segment on phobia …

I see something else far more concerning to me

It is a sort of … helplessness. It is the hunch of her body, the flat affect in her voice now; she is hardly able to make eye contact with me. As if I might really see her. And, in that seeing, I too might become aware of her ineptness. That I too might laugh.

It appears the psychiatrist she consulted for this phobic condition did laugh!

I begin to realise how much it had taken for this young woman to attend again. For her to tell yet another person about this hugely shaming story.

My own feelings are of compassion. I cannot even see the funny side of the event at this stage. I have no idea from where this phobic trauma emanated. I know it is old, wedged between layers of shame, confusion and terror.

We finish that session and arrange to do a set amount of sessions in the coming weeks. The hope is that we would get to the bottom of her presenting issue.

It is no longer usual for me to agree to a set amount of sessions, as I can never know what we are dealing with on client presentation. I did more of that in the early days of my practice when my initial training was in counselling. Counselling, like psychology, for the most part has a set number of sessions. These usually range from one to around twelve. At the outset, the resolution approach is strategy based.

I did do one other short-term contract (as you will read in a later chapter in my book). However, that was in an attempt to clarify what might be required for that person to continue working with me. I reiterate; this short term contract is not usual in my work.

Though at the time of this client’s presentation I had begun identifying more with my psychotherapy roots. In psychotherapy, particularly Transactional Analysis, the contract is the cornerstone of the treatment process, and much more than a simple business agreement. The main reason I did agree to a short-term contract with her was that she was reluctant to be in my consulting rooms at all. She needed an out and I gave her that in this short-term contract, to which I added a disclaimer. I explained we might need to recontract as these sessions unfolded and further relevant information surfaced. I added that we were engaging in a counselling process and that I would be using CBT and other interventions. She agreed.

She was from a cultural background where ‘telling others one’s business’ is not an option. When she told me this part of the story she said, ‘So how can I take this issue to the family? I would be a laughing stock, or worse!’

At this point, and I was not sure why, but I did not believe this was an archaic wound; early yes, archaic no. I may have been guided by the fact that in the information-gathering sessions I learned a family member had owned a dog when she was younger. She could not recall fear at that time around the dog’s presence and existence.

The presenting issue here felt as if it had occurred as a result of something else. She assured me she had never had an altercation with a dog throughout her life.

Phobias are often not as a result of a bad encounter. They mostly stem from children feeling unsafe in what is their home, a supposed ‘safe’ place. Phobias can result from many things, including but not restricted to an angry, violent, unavailable or dismissive parenting process.

Her symptoms appeared to have that ‘raw’ edge of recall that an experiential trauma has, as opposed to such an archaic wounding. In archaic wounding, the client is less able to describe the feeling; it just is. It has been there so long it has become embedded as a part of life. The client is unable to detach themselves from the feeling. Most often words are not enough to describe the experience. This especially happens when the experience is pre-verbal.

This did not feel pre-verbal to me.

As a result I decided to use CBT and exploratory work in an attempt to elicit more about the origins of the phobia and understand it.

Around this time I was intermittently using a technique (as an intervention) that, back then, did not have a lot of airtime, especially in Australia. It is called eye movement desensitisation and reprocessing, better known as EMDR. It is now used and recognised widely.

I had found the use of EMDR profound. I did not use it as a one-off treatment and only ever used it to assist an area of my longer term work with a client, often when at an impasse, to elicit pre-verbal information.

EMDR is not psychotherapy. I often read in sources on the internet or in medical model information that it is. It is in fact a technique, or intervention, to remove or elicit specific details of trauma. It can help find and desensitise trauma; however, it cannot repair archaic wounding. Such wounding requires long and repetitive unravelling. If EMDR were able to cure long and historic pasts, we would not have the levels of mental health issues, addictions and people killing themselves that we currently do.

In this case, eventually drawing a blank through the usual way of storytelling and talking, I decided to try EMDR. My thinking was that it might assist in ‘unwedging’ some useful data. At this phase I believed the short-term work in both CBT and talking might struggle to find the core.

We did several sessions of EMDR. She was responding well and reported feeling like she was working with, and shifting, some quite stressful experiences in her life.

I was not so pleased. I was not getting any of the readout I had hoped for, or required, to understand this intense phobic reaction to a canine.

One of the reasons she was happy with the work was that she had given up smoking during this time and attributed it to the work we were doing. While we were removing some disturbing events, and her general anxiety was reduced, I was not so sure. Giving up an addictive behaviour is complex and requires more than a few EMDR sessions. However, it was clear that in this work she was shifting layers of anxiety.

If we were thinking theoretically, the removal of the anxiety would have occurred as a result of us decontaminating, deconfusing and desensitising many long-standing, painful life events, not least that ‘dog attack’. Events she had never spoken of, to anyone.

During this time one theme came up repeatedly. I decided to pursue this point further, without EMDR.

I shared my treatment planning ideas with her and I kept her informed of my thoughts, findings and hypotheses. I wanted her to know why I was moving from one approach to the other, so as not to confuse her.

I share my thinking with clients; otherwise, they can believe they are doing something wrong if a practitioner changes a treatment plan or treatment tack. This often culminates in fear and further anxiety that they are untreatable. Such thinking, on the part of the client, is not usually shared with their unsuspecting practitioner. This can be a point of rupture, when clients often leave. As practitioners we only learn of this fear when a new client tells us of their previous experience and their own hypothesis that they are untreatable. Often an incorrect hypothesis.