Due to the popularity of last month’s four part series on grief, I have decided to take another chapter from my book Delving Deeper – https://jofrasca.com/book/ – and share it in another four part series. This chapter focuses on a phobia and explores the differing approach in a counselling and CBT style verses psychotherapy. 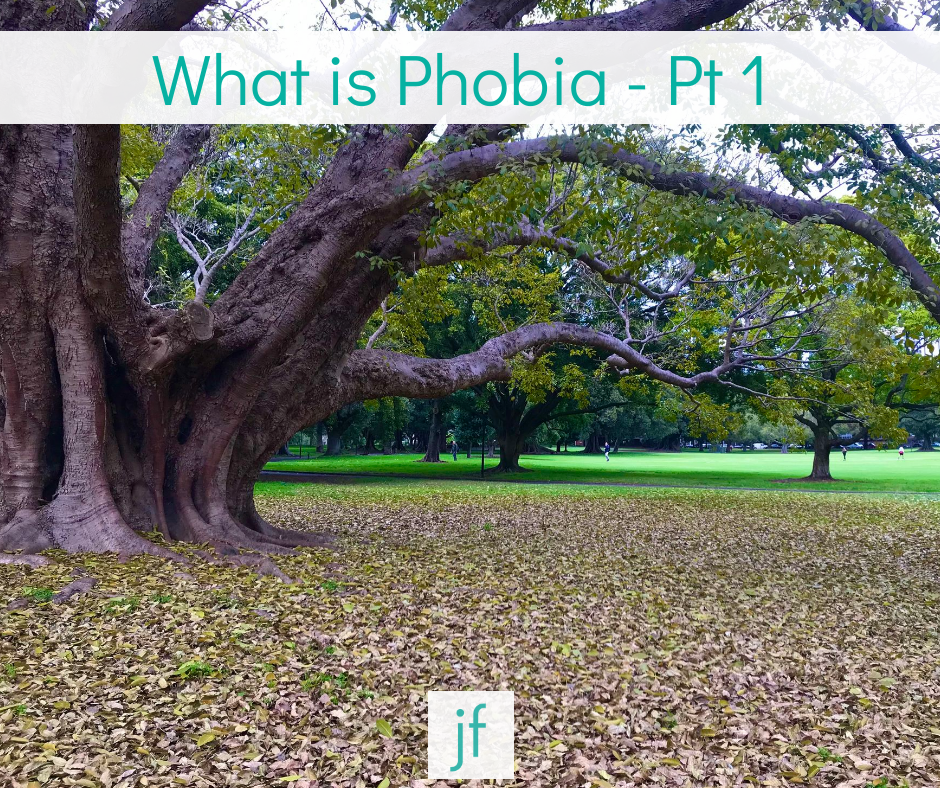 In the early days of training to be a psychotherapist, the pathology of a potential client, especially the phobia’s they might display, are not always clearly definable. I say this in hindsight. Perhaps if you had asked me about diagnosis, treatment planning, treatment and cure, at that time, I may have been partly blasé, even embarrassingly bombastic if I am totally honest.

It is a thing we often do as human cadets, learn a new skill and then assume we are experts in the field, and infallible!

I recall one such occasion.

I learned that later as well.

I had just taken on a new client. Perhaps it was even my first client.

With great zeal I declared she had a phobia, and was in fact agoraphobic. She perfectly met the criteria outlined in my mental health diagnosis training module. I recall she struggled to leave the house. She was barely able to make a short excursion in the car and certainly could not venture onto a bus, aeroplane or train. Her fear of the outside world was disproportionate to the actual danger. Her anxiety controlled her life. In her early twenties, married with three small children, she reported the agoraphobia being significantly worse since the birth of her third baby.

At this point I was at the end of my initial degree qualification. Over the years, in an attempt to better understand this field (my new career), I had done endless other training programs of four, five, ten, fourteen, even thirty days, as well as residential seminars and workshops. I had taken myself overseas to attend conferences and workshops I felt were important.

At this stage I had also done extensive hours of face-to-face intern work.

Added to that, I was in the early days of what would be a more than seven-year journey in psychotherapy training.

Plus I had only just begun my own personal psychotherapy component of the training. This is where the ‘student’ works with a qualified psychotherapist to delve into their own psyche. Personal analysis was an absolute, unyielding requirement of psychotherapy training and also in gaining the skills to work long term with clients. As Carl Jung famously said, ‘We can only take our clients as deep as we have been ourselves.’

I repeat, at this point I had no in-depth training.

One of those shorter training programs over this period was in neuro-linguistic programming (NLP). Interestingly, I had had an earlier encounter with NLP in the mid-1980s, long before being a psychotherapist hit my radar.

That encounter was in a business group for my then-corporate career. This group ran Friday-morning motivation and business development meetings. It was well attended by various groups of business people.

Scouting for good talent to speak to the group was always a challenge. A speaker with an edge was the mandate. We didn’t want the usual diatribe and idioms used in attempts to help change and build our businesses.

On one particular occasion we were told we had scored a speaker to discuss the latest in what would storm the world and change the way we think. This guy had just landed in Australia: Marvin Oka, the then-guru of NLP.

Everyone was wide-eyed and eager to absorb his every word.

His teachings were complex and consisted of new terms and unheard of words. Many grasped it immediately and with ardour. Many rolled their eyes and used words like ‘gobbledegook’ to describe their personal experience of this new emerging modality.

I recall not being particularly moved either way, though wondered, ‘Is it really that easy to create change?’

Fast-forward to the early 1990s. I could get another module done in the summer break if I did NLP. So that is what I did.

NLP teaches, what I believe, to be a very simplified version of working with phobia.

Having just learned this new skill (or intervention) I was terribly excited to work with this new client, to help her ‘burn off that phobia overnight’.

Was I optimistic? Hell yes!

In my gibberish I told my trainer, as part of my supervision, I was looking forward to working with this phobic condition.

She turned to me and looked me right in the eye. Was that disdain I saw? No. Never. Not this wise sage. That was not her way. She probably just thought ‘poor, stupid, naive trainee’.

Ever so politely, something she is renowned for, she said, ‘Oh, phobias. I don’t like working with phobias. They are very complex.’

This woman is a self-professed counsellor. She is one of the few people I have met on my travels who is very clear about the differentiation between psychotherapy and counselling, in particular.

As a result I heard a little voice in my own arrogant head say, ‘Ha! No, phobias are not, not when you know how to use NLP.’ By now I had done the NLP Practitioner course and had a convincing, shiny new certificate to prove it.

In that moment I was not bombastic enough to share this thought with my wise sage. Luckily. Had I done so I might have appeared quite foolish.

I came to learn, through my psychotherapy training and exceedingly intense supervision of another difficult case, that this particular phobic condition is complex. It is usually related to lack of early attachment and/or separation issues. Extremely early attachment, or, as psychoanalyst Melanie Klein might have said, ‘lack of attachment … at the good breast’.

So yes, phobias are complex! I was learning that they are difficult work.

I felt grateful to be in my psychotherapy training at that time. I say this because I recall the words ‘in over my head’ ever present at one point. I was fortunate to have been trained in psychotherapy by many extraordinary people. However, there was one other wise sage of significance. A wise sage who, at that time, seemed to know what I was thinking … and never let me get away with anything. It was this woman who shone the torch on the path ahead of me for those seven years of training. It was she who taught me how ill this client and many others really were. It was she who taught me the real meaning of transference and countertransference. Without her guidance this client and many others would not have recovered.

This client was indeed unwell and a few timelines and unfamiliar language (CBT or NLP) were not going to budge an early mother–child rupture.

I later learned she had seen both a psychologist and a psychiatrist prior to working with me. While she had done some useful work in these two fields, she had not recovered from her debilitating symptoms. This client had not been taken beneath the waterline of consciousness to find and delve into a very old wound. No form of CBT, with or without medication, was going to budge this fear-based wounding. As a result, the lack of a satisfactory outcome was directly related to the varying professional approaches she had attempted.

Her psychotherapy eventually allowed her to explore beneath that conscious level. It took her places she did not know existed. Sometimes sad, sometimes devastating. Rarely joyous.

As a result I journeyed as this client journeyed. She was in my intense supervision. Together we did deep and archaic work on her early life. By ‘archaic’, I mean events from the early developmental stages of a child’s life, mostly before five years old. In the beginning days of my work with her I kept her case well within my psychotherapy training and supervision resources.

She later allowed me to use her story as a case study for my exams and, as a result, her every step through psychotherapy was monitored by my trainers and supervisors. Her journey with me continued well beyond my exams into eleven years of psychotherapy. It finally and beautifully culminated in her being able to do many unimaginable things. Such had been the pervasive and slow onset of her mental health issues, she had known nothing else; she had had no other way to live.

She told me that one of the most exciting things about having stayed in her psychotherapy was the ability to ‘freely’ bundle the kids in the car and take off to any location, any time, including camping. She even took her family to America to visit Disneyland, a flight she never dreamed of making. It had been something she feared placing on her bucket list.

It was a long, hard road, with her often wanting to quit. I never forced her to stay. She knew she was getting change along the way, albeit slowly. She finally learned something she always feared; her parents had been totally preoccupied. They were highly successful in business. For them to be so successful, she had been shuffled from carer to carer, nanny to nanny, relative to relative, so that both her mother and father could get to work. She wondered why she had never felt grateful when they told her they had done this so that she could have a better life. They told her they did it so that she could have everything she wanted. All she ever felt was abandoned and alone in the world, that she was not loveable enough for them to stay around.

Often this is the only sense a babe or small child can make of such adult behaviour.

I recall the session vividly when she screamed, then sobbed uncontrollably for the remainder of the session. It was her turning point. She screamed, ‘But all I wanted was for them to be with me … hold me … play with me … love me!’

This is the stark difference between psychotherapy and other forms of treatment. It takes time, a long time. And it is painful. The good thing about psychotherapy is that when the change occurs, because we have been back to the origins of the lodged trauma, the change can stay ‘stuck’. If change does not stay stuck – that is, the behaviour or behaviours continue – it means we have not found the root cause or source of the issue.

With regard to archaic issues, I am arrogant enough to say consistent change happens only with psychotherapy … or a life threatening situation.

And, while every client, and every phobia, and every journey in psychotherapy is different, it is the journey below the conscious, the journey back to the source, that is crucial.