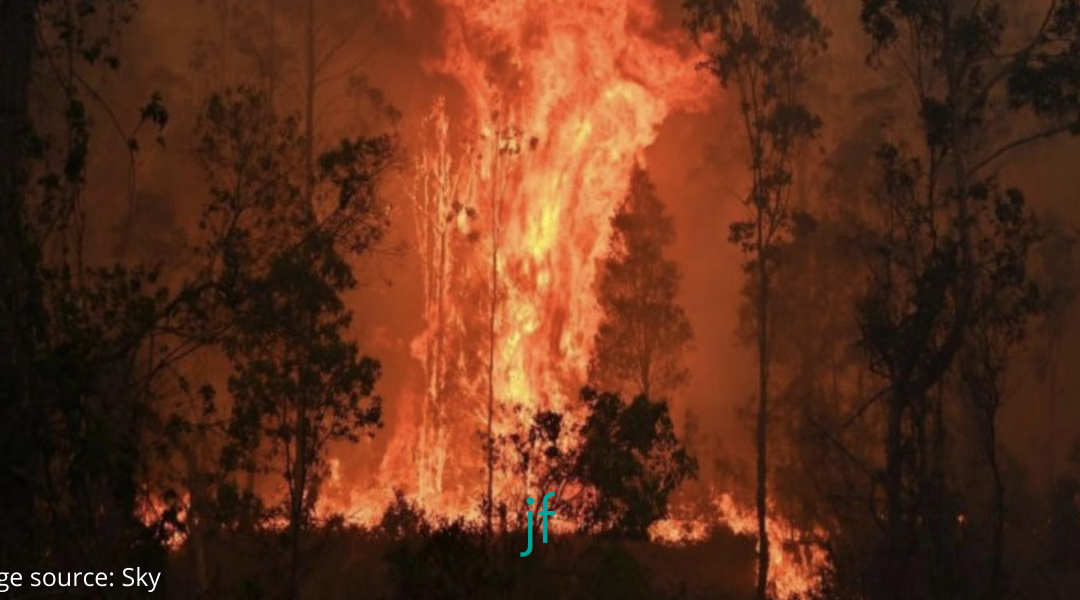 In light of the recent horrific and devastating bushfires in NSW and Qld, Australia I was
personally haunted by my own past. I thought it an opportunity to share how nebulous
archaic trauma is and how fiercely it might emanate from that unconscious position in our

psyche … without our knowledge.

...we were playing in the playground, suddenly the teachers called all the children into the
classroom. This felt very odd, unusual. Unusual also was the mood of the senior teacher, Mr
unflappable. He was sweating, breathing deeply, grey in color and I could see his hands

How old was I? I don’t really know. It was in primary school and by the few things I do recall;

the assistant teacher, my sister still being there, and a brother who had not long started

school … plus other vague details … I would have been about eight or nine.

… the teacher begins to tell us...your parents will be coming to pick you up from school.
There is a very big and dangerous bushfire heading rapidly (I recall that word for an obvious reason, as it was the lynchpin portraying the danger and urgency of this situation) toward us.
I recall, scurrying, rushing, raised voices, hushed voices and a ‘mood’. All unfamiliar to me at

that stage of my schooling.

… we are all lined up at the gate, resembling the usual after school picks up though it was mid-morning. This was not usual. Like myself, some of the children had picked up that this was

different, and they were crying. I knew crying was bad and means fear … I too began crying.

… the first parent arrives and says to the teacher, ‘this fire is dangerously close, we have the

Her fear was palpable. Though I understood very little about the meaning of a bushfire at

that stage of my life. I just knew I had something to be really fearful about. By the time my
own mother arrived I was still crying, silent crying, crying to worry others but a knowing,
that everyone was very worried and that something catastrophic was about to happen. I

was told, ‘there’s no need to cry, everything is alright’ … but I knew better.

How often do we use these platitudes? Where do they come from? It was clear the adults

were very frightened. Added to that how many times had I heard ‘grownups’ say, ‘… ‘at least
a flood leaves something behind … a fire leaves nothing …’. It was likely that tiny piece of
knowledge was feeding my fear, fear which was added to by the overt fear of the

I have frequently reflected on how as adults, we have those ‘grownup’ conversations in the

presence of small children; words, language, stories, facial expressions … that we would be
better shielding children from.
Back to the story … I recall arriving home from school with my mother, siblings and several
other children that lived on our farm. Nothing happened. There was no information and no
conversation. I recall the fear and anxiety building having been exposed to an urgency, fear,

snippets of conversations and distressed adults … into a now silent world.

I recall asking what was happening and why we were weren’t ‘going away from the fire’,

which was coming toward us. Nothing anyone did or said made any sense. Most of the men
from the farm were either out working or had gone to help with the fire. I knew the women

were frightened, so, I was frightened. My sister tried to comfort me, hardly her role.

I recall my mother saying, ‘I have the photo albums packed in the car, we can replace

everything but not the photos’. And to this day, in the threat of fire, my family still grab the

photo albums first … such is life on farms close to the bush.

haunted me for so much of my life, leaving mysterious, after years in my own psychotherapy

… though we did little to no workaround bushfires per se.

That memory is the smell of smoke.

No matter where I have traveled in the world, the smell smoke would always send up an

alert that catapulted me into high levels of distress and anxiety. I ‘knew’ I was in danger,

though it made no sense because at that moment I was perfectly safe.

burning trees and leaves. A very different smell to general wood-burning such as a

At the smell of burning wood and leaves, I would automatically scan the skyline for the

While this olfactory reaction to the smell of smoke has for the most part abated, I now feel

sadness, knowing that where ever a bushfire is burning, someone is afraid and suffering …