Reflections on COVID-19 in the Room 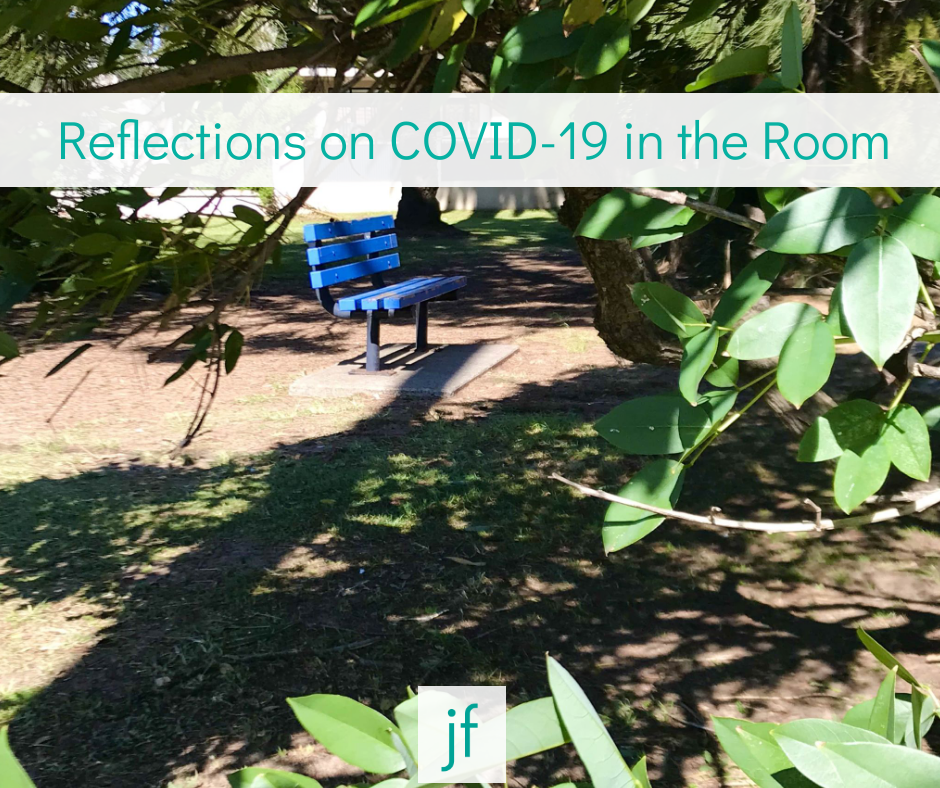 As the heat began to subside from the Australian summer so did one’s sense of safety, joy, freedom and all that we know.

We began to hear murmurings of a virus … quickly that virus became a pandemic. In a few short days, this virus began to deconstruct and derail life as we have all known it to be.  It occurred in a way no one of us could have imagined. Businesses, school, shops, cafes, gyms, restaurants, conferences, air flights, travel … generally, sporting events, the Olympic games … all shut down, in an instant, literally.

Unimaginable, though something we should never have had to imagine. There has been so much out and about what now seems superfluous for discussion, and, in some way, perhaps rubbing salt into an already painful wound.

So, this blog is not necessarily to discuss what we all, already know, nor who was at fault, nor who should have done what when … all we know right now is that our landscape has forever changed.

During this time, for me, it has been difficult to write anything much, least of all a blog, while every day keeping up with the devastating, unfolding of time now referred to as; ‘the world pandemic of COVID-19’.

Though having said that, writing as a difficultly, I have been heartened to receive messages from people asking where my blogs are and was I okay because those people had not heard anything in so long. Thank you. While I attempted to keep my social media education on psychotherapy going, and my practice humming along, anything else seemed above and beyond the call of duty. However, the messages about what was going on in my life was yet another sign of what people have been doing during this time … checking in with each other.

I guess that begs the question; what would be the nature of a blog at this point in time? I’m thinking this is going to happen to many of us in different ways and at different times … a time for us to sit and reflect on our lives and what it means to live through something so extraordinary that it will change the way we see ourselves in our own world, and perhaps, our world.

One of the things that moved me in the early days of the pandemic (perhaps even before WHO categorised it as a pandemic) was how generously people began sharing and exchanging great swaths of information … around the world. It was as if everyone was saying to each other ‘did you know this’ … ‘have you seen that’ … ‘here is an update’ … ‘how are you in your country, city, town, home’ etc. I still get goosebumps thinking of that time of sharing, empathy, thoughtfulness and consideration of each other.

My personal experience of this has been extensive. It has happened on my walks with Saydee, attending my workplace, standing in the social distancing coffee line, the line at the supermarket, anywhere I came in contact with another person … people are saying hello, being polite, standing back, making warm gestures, situations where normally people would not even have noticed another human standing or walking by.

Another thing for me at this time has been the unprecedented unity from humans toward humans; words, thoughts, acts, singing, sharing, flowers, clapping, food, shelter, support … a list longer than I can recall. Was this the first occasion in history, where every person in the world was affected by the same issue at the same time? Albeit variances of prevalence, exposure time, seriousness, and policies for coping with the pandemic? When have we been so connected that it would have even been possible? Could it be a new beginning of connectedness?

Watching, as we have turned to, and on the politicians, to and on science, to and on reporting rates, to and on media … has been moving, heart-warming, heart wrenching and terrifying.

Each step has been profound, and almost incomprehensible … until we had no choice but to comprehend and process what was unfolding: news of the seriousness of the virus arrived out China, it then changed and morphed into something more unimaginable. The question of human to human transmission, to lockdowns, to hundreds of thousands of people dying, to the threat of the virus moving sequentially across countries and continents, some countries even thinking they had escaped severity. And … this time now … the coming, slowing out from under months of internment, to what? To normality? Would that be possible? Many think not! Only time will tell.

So many ill, so many dead, some many with lifelong consequences. However, as the dust begins to settle (and concerns that the data may be forever incorrect) we experienced first-hand something that has moved from an inconvenience up to and including terrifying … is now beginning to abate. Italy took us to an understanding of COVID-19 we wish we had never known. Spain followed. People were still not convinced of the efficacy of this virus and as a result, shortly after that the US then the UK expressed all we could ever have feared; this virus is relentless. As Africa and South American unravel their high levels of infection rates some counties begin to return to some sense of normality … though not really … perhaps not ever.

What is unfolding in my work now is less than fear, it’s more a sort of tiredness, a mendicancy, ‘please, let us get on with our lives’.  While stepping strategically through the guidelines and now coming out the other side, I am also seeing nightmares, increases in anxiety, and rage. All that has been inexpressible until now is florid and in the room. Of course, it arrived disguised as something else; anger at children, fight with a spouse, intolerance of a neighbour … !

Generally, we are struggling to mourn the enormity of the death toll, and the death of so much and so many, with the real account of we have endured incalculable. This type of experience can play out as a sort of humming anxiety, nightmares, uncertainty and grief. Let’s see what it brings the world.

Psychologically the hope is that we will able to mourn as an individual, as a family, as a community, as a country, as the world we live in together.

As we begin to enjoy the sunshine of life, the hope is that we will be able to take growth-gifts for ourselves from such a disturbing, appalling and traumatising experience, and that we being to love, give, share, join and play in this grief together, as we did as the pandemic unfolded. The hope is that we can use each other’s experience, and not in isolation, to move into the future with more thought, care and love for others.

In summary, in our work as psychotherapist’s, we consider the most important human need as attachment. While this can be discussed and mused over, it is within the parent-child attachment that the ability to attach occurs. The human drive is always to attach even if the early developmental stage is not properly fulfilled. This need is activated within our intimate relationships, with our children, friends and people we meet in general … to varying degrees. One of the things I have observed that is occurring during COVID-19 is that human drive to connect, and in a way, the seeking of attachment has aided the healing from the very beginning of the outbreak … it began when we all started sharing that information and checking in with each other. This is powerful attachment, attachment at its very best. It will bring with it a way forward.

Have we been thinking all along that we are warm, kind, trustful, interactive … when in fact we have been playing a social game of expectation? With COVID-19 we have been faced with our own mortality and as a result, have become more real. Is this what happens when people live in fear that they might die?

In being, vulnerable, sacred, uncertain, and unable to hide, have we, in fact, become thoughtful, kind, warm considerate? And can this formulate into a sort of honestly, trust, awareness … and ultimately attachment? Time will tell.