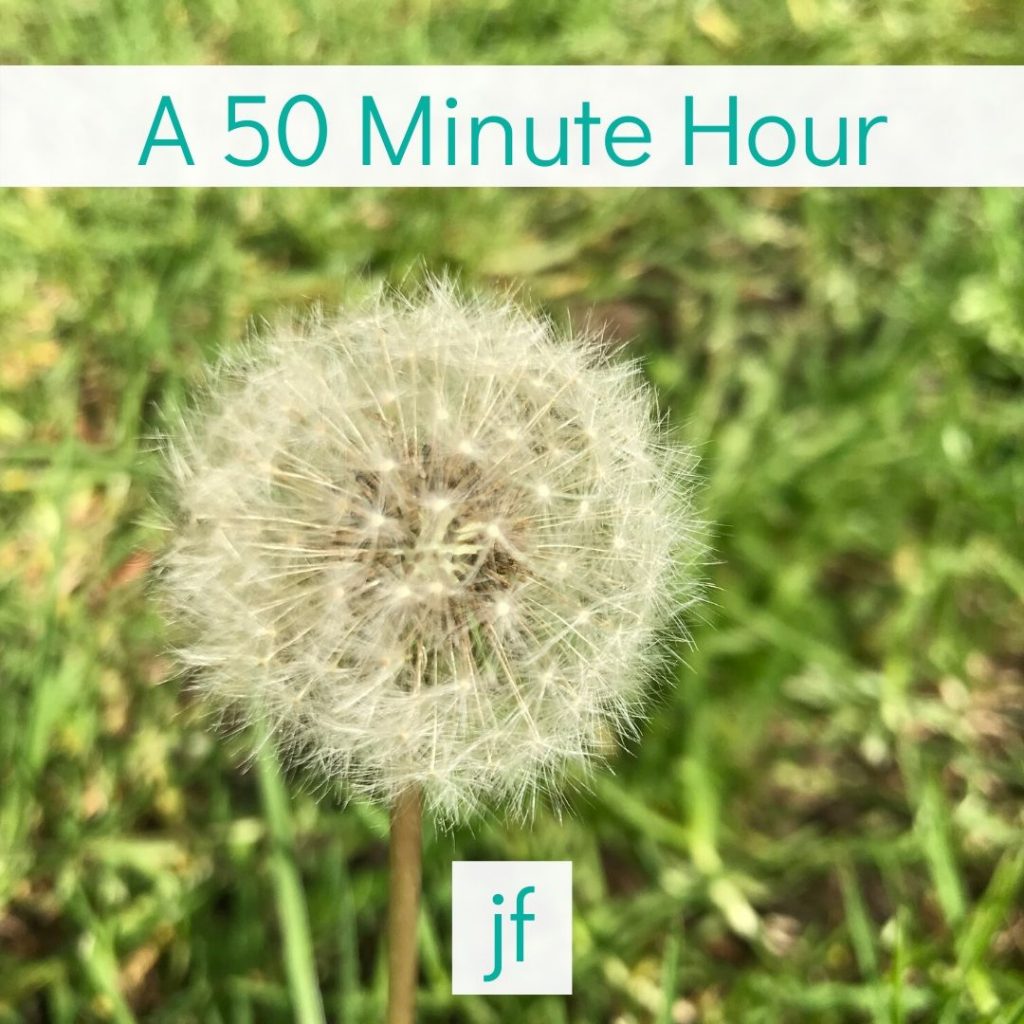 Seinfeld, the sitcom, was just ending as I walked into a friend’s house, many years ago. While I never actually watched the series, it often played in the background while I was at various friend’s homes over the years. So much so that I generally got the plot. On this particular day, in those few moments at the end of the show, where he sits on a barstool and talks to the audience, he asked the question; (my memory, not his words) – ‘so what is that 50-minute thing with the therapy session, why not an hour … ?’ At the time I thought; what a great question, but I don’t recall staying tuned-in enough to hear his own response to his question.

I have thought about that moment many times over the years when something about the 50 minute session time pops up in diverse conversations.

I have read articles, spoken to colleagues and tried to understand my own relationship with the 50 minute hour. I know personally I love to work a 50-minute session.

As this is a frequent conversation piece, I thought I might share a few of the reasons I have been given for that odd sum of 50 minutes. I have managed unearthed a few logical, stimulating and noteworthy thoughts over the years about where this odd and asymmetrical session time came from. Some of those reasons … to a psychotherapist … make more sense than others.

One is that many people think it’s about making notes post the session and before the next client arrives. I’m not sure about other psychotherapists but 10 minutes would not suffice to write notes of any significance, however, this could be one reason.

Another is the common suggestions, a notion I do like, is around boundaries. Boundaries and setting an example within the paradigm of the psychotherapy session is crucial. I learnt very early on my training and early practice work to adhere to the 50 minutes of the allocated session. It is tempting to ‘give the client more time’, but it never works in anyone’s best interest, especially the client. It is not a good role modelling to go over the contracted time with clients as it reflects a disrespect of one’s own time and that of the client … the client likely having to be somewhere else after their session. In fact, I have heard people complain that the practitioner they were attending (psychotherapist, psychologist, psychiatrist, counsellor, coach etc) ran over time and made them late for something else.

Another reason I read with fascination was that it was just a random act of structure that Freud decided on a 50 minute hour. Knowing Freuds world intimately there has not been anything left to random thinking. As a result, I personally would be doubting that reasoning. While Freud may not have been correct or accurate on every point of theory he wrote about, nothing was random.

The following reason is a stand-out and feels important in helping to understand why the psychotherapist needs to adhere to the 50 minute hour. You see the work that unfolds in sessions is often dark, painful and elusive, and it is perhaps in that the client needs to know there is an escape route, and that the psychotherapist will follow that escape route to aid the eventual relief for a client … if this is not done, the client maybe be left to feel they will never leave the psychological abyss that can be created within the session. If this relief, or escape hatch, is not presented, a client may never traverse the dark recesses of their minds for fear of being stuck there.

So perhaps it is easier for the client to divulge information when they know there is a solid, impermeable end in sight.

Added to this dilemma is one of the most important reasons for me around the 50 minute time frame in that it often takes a client a long time to get to the deeper memories and feelings. It is common for a client to toss an archaic grenade into the room as they are about to leave. If we think into the concept that the client’s unconscious is always on guard to keep from freely giving information, we have a reason to keep a boundary around time. Having a 50 minute hour allows for a revelation, then a closure, without clients having to sit agonisingly in that revelation. A nice neat bundle, that can be opened and closed to prevent sustained unbearable psychic pain from that exposure.

If you have any thoughts or experiences of the 50 minute hour, I would love to hear from you. Please free to share them on my social media for discussion.